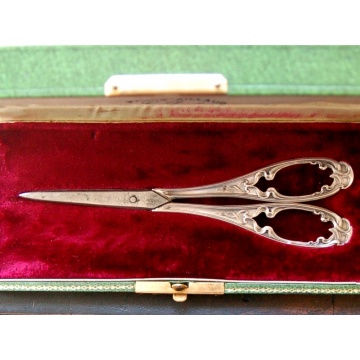 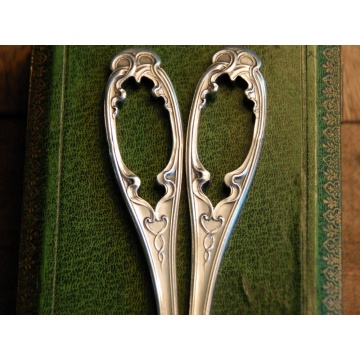 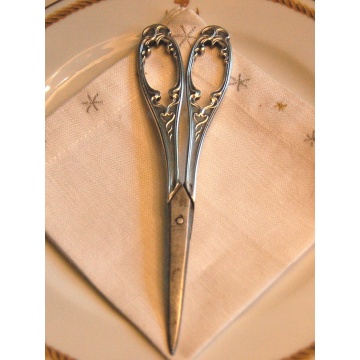 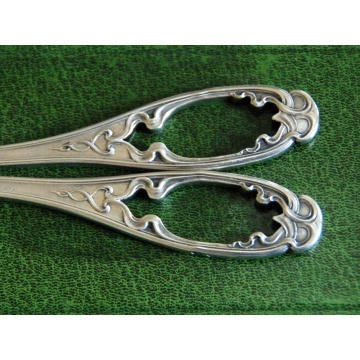 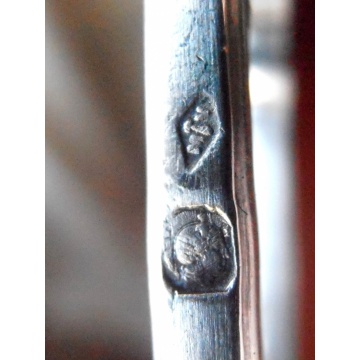 A very fashionable item during the reign of Napoleon III, the grape scissors were ‘The’ item to have when presenting guests with fruits during the meals.

This pair is charmingly worked with Art Nouveau waves on the handles.

Art Nouveau was a movement that swept through the decorative arts and architecture in the late 19th and early 20th centuries.
This movement, was aimed at creating styles of design more appropriate to the modern age, and was characterized by organic, flowing lines, forms resembling the stems and blossoms of plants.
The rising of Art Nouveau can be traced to two distinct influences: the first was the introduction, around 1880, of the Arts and Crafts movement.
This movement, much like Art Nouveau, was a reaction against the cluttered designs and compositions of Victorian-era decorative art. The second was the current vogue for Japanese art, particularly wood-block prints, that swept up many European artists in the 1880s and 90s.
Japanese wood-block prints contained floral and bulbous forms, and “whiplash” curves, all key elements of what would eventually become Art Nouveau.
The movement lasted less then 2 decades making way for the Art Deco movement that took over in the early 1920s.

This charming pair comes in its original presentation box, which is in perfect condition.
The Shears are very well preserved, and work perfectly!
The handle is in solid silver, while the blades are in steel.

The Makers’ Mark is for MAILLARD Frères & Jules VAZOU and shows an M and a V separated by a Mallet.
The Mark was registered on September 11th 1897 and cancelled on August 6th 1903.
They held shop at 113 Rue de Turenne in Paris. Their work showcased mostly Art Nouveaux pieces of which several are today exposed in the Musée D’Orsay in Paris.