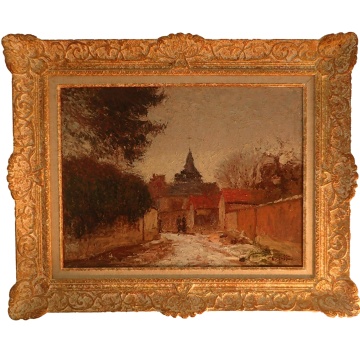 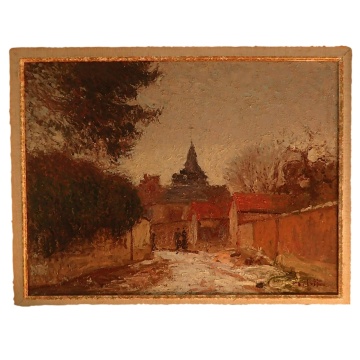 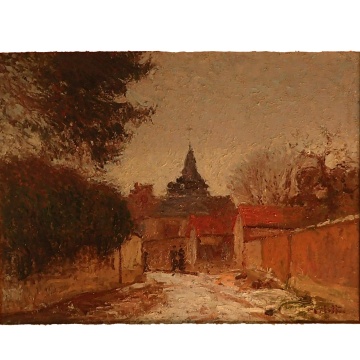 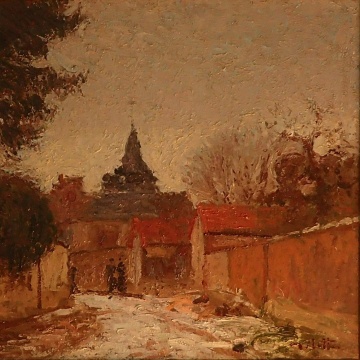 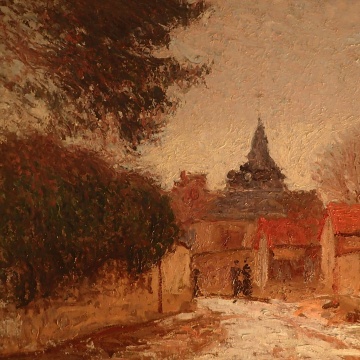 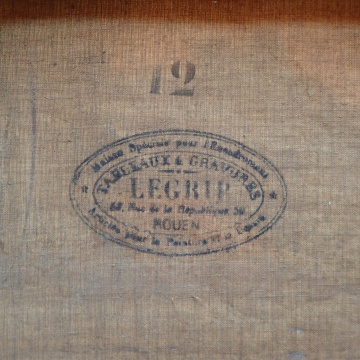 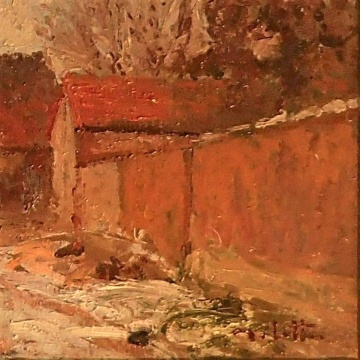 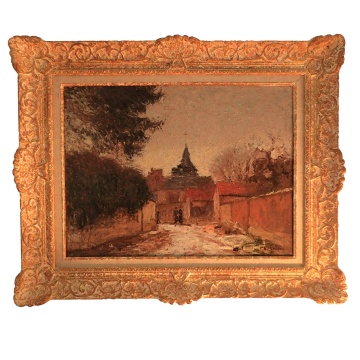 A Lovely Snowy Scene Showing the Street leading to the Church of Notre Dame du Vaudreuil, with a dusting of snow still on the ground, by Joseph Delattre.

Joseph Delattre (August 12, 1858 in Déville-lès-Rouen / August 6, 1912 in Petit-Couronne) began his working life as a glazier to help his father and at the same time took evening classes at the municipal school of painting.

From the beginning, he showed his attraction for impressionism and quickly left the Academic teachings to join his friend Charles Frechon in his studio.
Admiring Monet, Pissaro and Sisley, he was inspired by their works to transcribe the effects of light.
Delattre’s health was fragile, and he began to feel the first signs of pneumopathy, which eventually would end his life.

In 1896, he created the ‘Free Academy’, and it is then, in the open air, around the city of Rouen, that he set his easel and gave lessons to young artists, such as Marcel Couchaux, Narcisse Guilbert, Narcisse Hénocque, Maurice Louvrier…
The studio was frequented by various artists, including Camille Pissaro, who said of him: “He is an enthusiast who seemed to have been mocked here, but who, in reality, is the only one with an artist’s eye”.

In 1902, Joseph Delattre settled in Petit Couronne where he painted most of his works until the end of his life.
He regularly exhibited at the Parisian salons, but also at the Legrip gallery in Rouen.
The famous merchant Durand-Ruel organized two private exhibitions of his paintings in 1900 and 1902.
His paintings can be found in the museums of Rouen, Swansea, Bernay, and the Musée d’Orsay.

We know from his correspondence that Joseph Delattre resided in Vaudreuil at the end of 1900.
Several paintings are the result of this stay, including the one shown here, representing a street in Vaudreuil dusted by snow and the bell tower of Notre Dame du Vaudreuil.
This work offers a complete immersion in impressionism, as much from the point of view of technique as from the construction and rendering of the atmosphere.
The artist has framed his subject in such a way as to guide our gaze towards the center of the canvas, thus reinforcing the effect of perspective.
Delattre used a lot of material to transcribe this scene, the ‘Impasto’ is thick and generous, applied in short and clustered strokes to reinforce the relief effect.
The work of the sky is simply breathtaking, we can grasp each touch that the artist has posed to create the effect sought and felt.

The talent of the artist has transformed a street scene into a masterpiece, this is what we call talent.
A magnificent work of Joseph Delattre, in its full artistic maturity, signed in the lower right corner.

On a side note, the canvas is from the Maison Legrip which provided the best canvases to all the famous impressionists.
The Canvas measures 18 inches high by 24 inches wide.
The Wood frame measures 26 inches by 32 inches