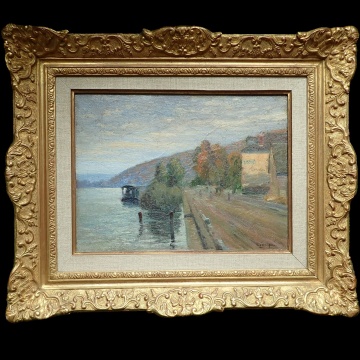 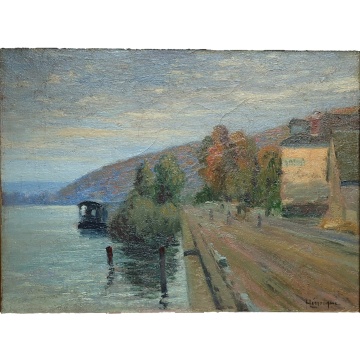 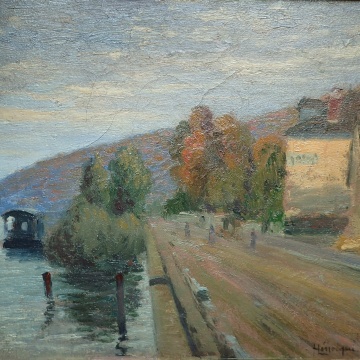 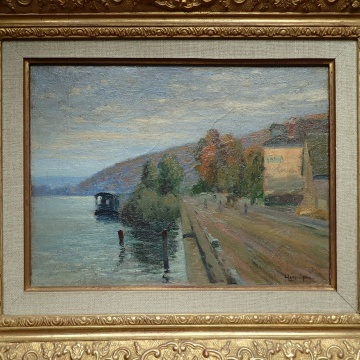 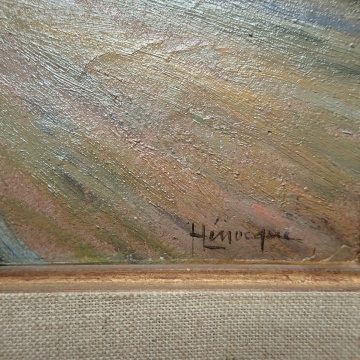 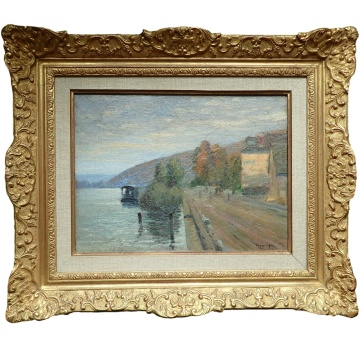 The Ferry Landing at La Bouille on The Seine By Hénocque

A Lovely Oil On Canvas Of the Ferry Landing Location of La Bouille On the Seine River By Narcisse Hénocque.

Narcisse Hénocque is one of the most famous painters of the Rouen School.
Born in 1879 in Mont-Saint-Aignan on the heights of Rouen, he was very quickly attracted to painting.
While painting in the Solferino garden in Rouen, he had the good fortune to meet Joseph Delattre, ‘Grand Master’ of Rouen painting, who suggested that he attend classes at his school “l’Académie libre de la Rue des Charettes” which had been open since 1896.
The young man accepted and became one of the most conscientious disciples of the Academy.
Joseph Delattre’s influence on his work was considerable.

He had the pleasure of seeing the Musée des Beaux Arts de Rouen buy two of his paintings.
Narcisse Hénocque continued to exhibit until the end of his days in 1952.
His favorite motifs were the banks of the Seine near Rouen, Norman landscapes and flowers.
He also produced some very beautiful “Snow Effects”.

Our painting falls into the category of Narcisse Hénocque’s favorite subjects, since it is a view of the banks of the Seine.
The location is exactly at “La Bouille” at the ferry landing, in one of the loops of the Seine, south/west of Rouen.
Under the influence of Neo-Impressionism, he created his décor with light touches, in shades of mauve and pink that he used to suggest the misty and wet atmosphere of the banks of the Seine.
His quality of execution evokes for us, with amazing realism, the current and the reflections of the river.

A magnificent work by Narcisse Hénocque, signed in the lower right corner, on its original canvas, in a Montparnasse style gilded wooden frame.