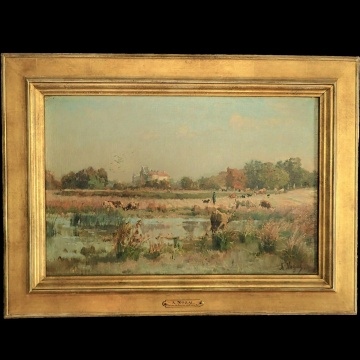 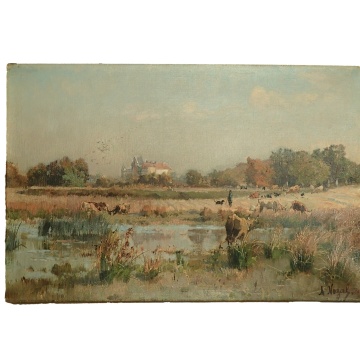 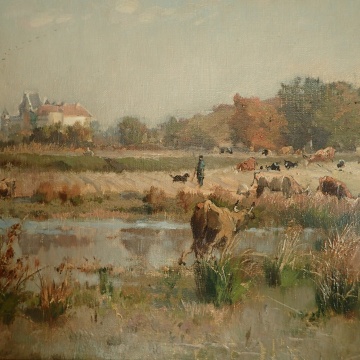 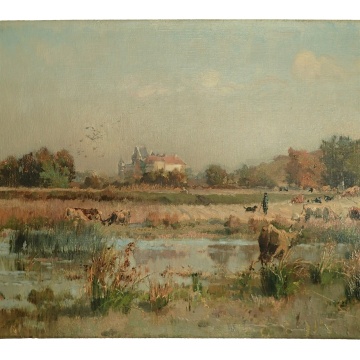 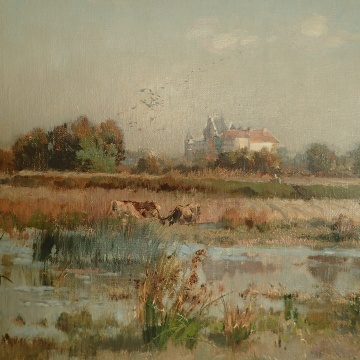 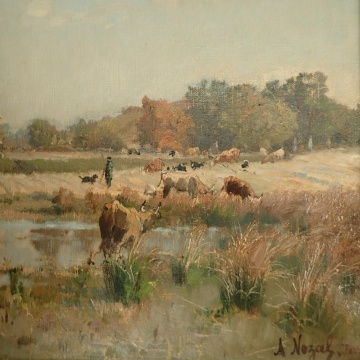 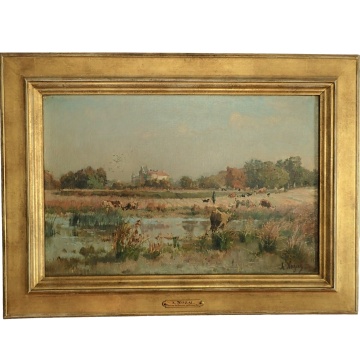 The Castle Of Bouchet En Brenne By Alexandre Nozal

A Lovely Oil on Canvas painting of the Castle of Bouchet en Brenne, in the Berry area of France, by Alexandre Nozal.

Alexandre Nozal was born in Auteuil in 1852.
The son of a wood and coal merchant in Paris, he was destined to join the family business, but fascinated by drawing from an early age, he ran away at the age of 17 and attempted to board a ship bound for America.
He was intercepted by one of his brothers on the quays of Le Havre, the brother convinced his father of his brother’s vocation and Alexandre enrolled in the studio of the painter Evariste-Vital Luminais, who introduced him to the Brenne region.
It is indeed “Etang de la Brenne” which will be his first piece presented in the ‘Salon de Paris’ in 1876.
He subsequently sent his works to the Salon without interruption until 1928.
Alexandre Nozal completed his training with the landscape painter Henri Harpignies, through whom he met Camille Corot and Guy de Maupassant
He received numerous awards at the 1881, 1882, 1883 and 1890 exhibitions, received government commissions as early as 1886, won a bronze medal at the 1889 World’s Fair and a silver medal at the 1900 World’s Fair, and was awarded the Legion of Honor in 1895.
Alexandre Nozal also taught his art, and his students included Henri Biva and Jeanne Busquet, whom he married.
He died in 1929 in Paris.

During his career, he traveled extensively, across France to capture landscapes of all kinds, but also in Spain, Algeria and Switzerland.
Strongly influenced by the Barbizon School, he particularly appreciated water landscapes, riverbanks, marshes and ponds that he knew how to render with a striking vibration.
His paintings are present in the museums of:
Saint-Malo, Caen, Dieppe, Bourges, Châlons-en-Champagne, Gray, Montpellier, Louviers, Pontoise, Montreuil, Paris at the Petit Palais Musée d’Orsay and at the Musée Carnavalet, Lille, Beauvais, Brest, but also at the British Museum.
In our painting, Alexandre Nozal has brought together one of his favorite places (La Brenne) and one of his favorite subjects.
However, this apparently bucolic scene puts in parallel two different worlds between the castle supposed to represent ease and opulence and the cowherd representing modesty and hard work.
The artist still knows how to move us with his light and precise brush, managing to recreate with an exceptional dexterity this marshy landscape.
The accuracy of the choice of tones and the composition all in balance between the different elements, allows us to appreciate the mastery of this great painter.