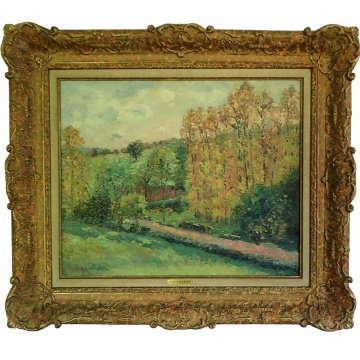 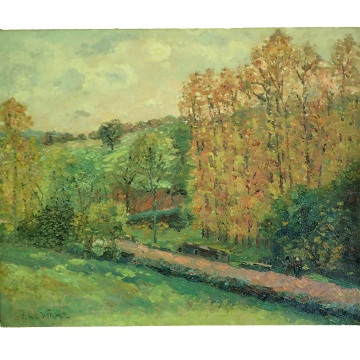 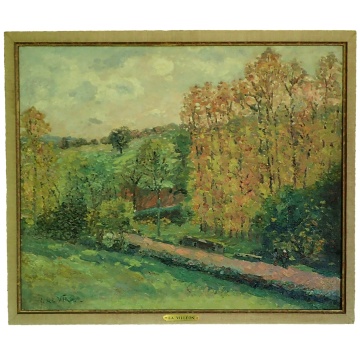 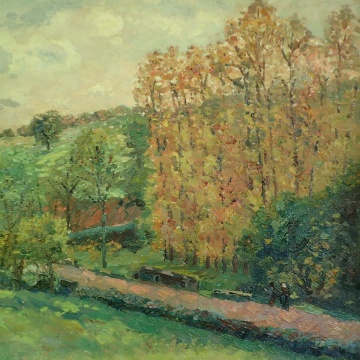 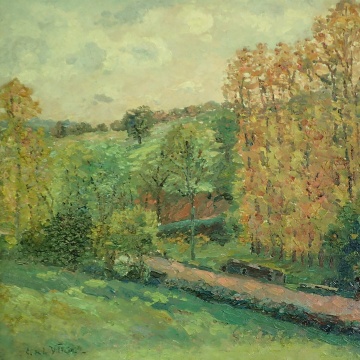 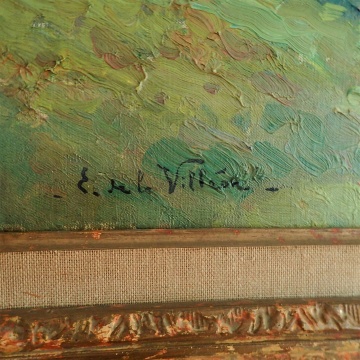 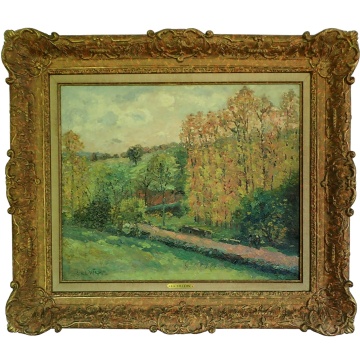 The Poplars In Autumn By Emmanuel de la Villéon

A lovely Oil Painting on Panel of ‘The Poplars In Autumn’ By Emmanuel de la Villéon.

Emmanuel de la Villéon was born on May 29, 1858, in Fougères, Brittany, where today a museum celebrates his life and paintings.
Coming from an old Breton aristocratic family, Emmanuel de la Villéon dedicated his life to painting.
In 1880, he left his native town for Paris, enrolled at the Académie Julian, and was introduced to plein air painting by his friends Alfred Roll and Emmanuel Damoye.
His work is inspired by the places where he lived or stayed. From his youth in Brittany and later at his brother’s castle in Montmuran, near Fougères, Paris and especially the Ile Fleurie, Chatou, where he sought out undergrowth and the water of the Seine.

His marriage, in 1892, allowed him to discover Switzerland, where his father-in-law owned a chalet near Yverdon-les-Bains. That same year, he moved to his brother-in-law’s castle in Pesselières, in the Cher, a romantic place, tailor-made for an artist like him, with undergrowth, beautiful trees and water, around a beautiful castle.
In 1900, he bought a property in Salvar in the Nièvre, which he kept until 1936 – ideal bucolic landscapes for this nature lover, with many small bodies of water so precious to the impressionist that he was, in search of the sensations of nature and light.
Two thirds of his work is done around four places – Montmuran, Pesselières, Yverdon and Salvar. In each of these places, he pursues his tireless quest for absolute beauty.
Emmanuel de la Villéon loved to travel. In 1889, his first trip abroad, to Holland, made him discover a radiant light, with changing atmospheres. In 1892, for his honeymoon, he left to discover Spain. Then, from 1920 on, he regularly stayed with each of his three daughters in Mainz, Germany, Grenoble, and Yonville (Somme).
Emmanuel de la Villéon was one of the last representatives of impressionism; a curious painter, he was interested in the different techniques and research of other painters of the time, pointillism, divisionism, etc.

Solitary by nature, he always remained independent, creating his own style made of a medley of different techniques.
The strokes are sometimes hatching, sometimes large, sometimes very small to create an airy impression, especially in the undergrowth. The material is often applied in pure color, sometimes mixed on the brush. At the bottom of the paintings, representing the ground and the leaves that litter the undergrowth, the approach is bold and almost pointillist, the upper part of the painting being more classical. He knows how to do everything and chooses the technique, for each painting, according to the subject treated or the expected result.
His main concern is the light. How to transcribe its shimmering on the waters of a lake or the sea, its rays which pierce through the trunks of trees in a forest or the heat which emerges from a plain warmed by the summer sun?
To answer this vital need he remains faithful to the impressionist touch. These pure notes of color, juxtaposed quickly one beside the other, allow him to capture the atmosphere of a furtive moment. La Villéon worked a lot around the same view, painted at different times of the day, even at different seasons.
The landscapes under the snow are a unique opportunity for him to play brilliantly on the shades of blue, pink and purple that the sun reflects on the ice crystals.
From 1890 he exhibited at the Salon des indépendants, the Salon de la Société nationale des beaux-arts, the Société moderne, the Salon d’automne, the Salon des tuileries and in several Parisian galleries including Durand-Ruel and Georges Petit.

He also exhibited in the provinces and abroad, as in 1918 in the USA where he sold 9 landscapes, which were acquired by American collectors, in 1925 in Denmark, in 1927 in Japan.
n 1943, he was 85 years old. He organized, at the La Boétie gallery, a large and final exhibition illustrating his entire life and work. It was a success, hailed by the critics. He then decided to prepare another one for the following year. But suddenly, on January 7, 1944, he went to bed with pneumonia. He died two days later.

The painting presented here is an oil on canvas dated 1907, referenced in the artist’s catalog raisonné under # 546 entitled “Poplars in Autumn”.

In her notebooks, Mrs. Collard (the oldest daughter of the artist) gives additional information regarding it, with the location described as: ‘route de St Verain à Biétry (Nièvre)’ (the road from Saint Verain to Bietry).
A label on the back of the canvas informs us that this painting was exhibited at the Ruaz Gallery in Paris in 1961.
A fervent admirer of nature and more particularly of trees, E. de La Villéon once again gives us proof of his immense talent at the service of his art.
The poplars, with their shimmering colors of yellow orange and ochre, are placed in a chevron delimited by the paths. A second, larger chevron, formed by the crest of the trees and the bottom of the meadow in the foreground, guides our gaze to the center left of the painting where a lone poplar tree is placed in front of a more distant line of trees.

Mixing different techniques used by painters in this era, La villéon treated the foreground and the sky with an impressionist technique made of short and close brushstrokes, while the parts delimited by the chevrons are treated in a rather pointillist style, but without going to the extreme.
The whole shows a generous ‘impasto’, contrasting with areas where he left the canvas raw to create even more contrast.
The effects of relief and movement are striking, the colors seem to spring from the painting.

This magnificent painting by La Villéon, signed on the lower left, is presented in an original gilded wood frame.
An information sheet written by Robert Peirce, expert, and author of a book on Emmanuel de La Villéon will be given to the buyer.