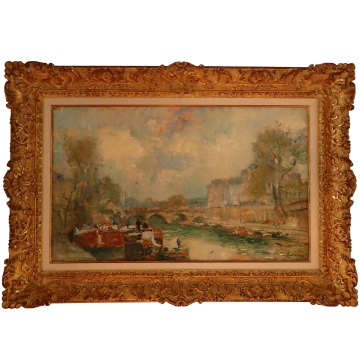 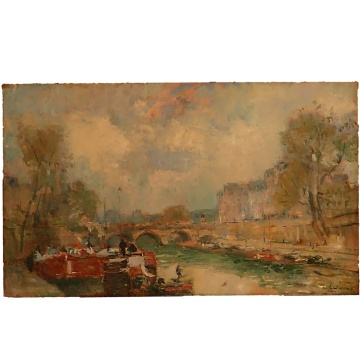 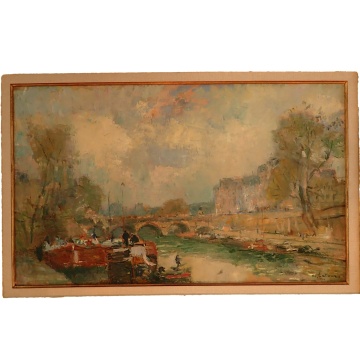 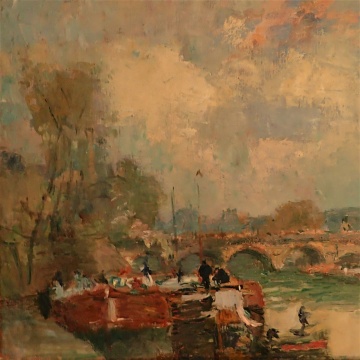 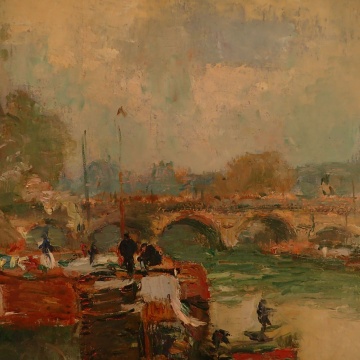 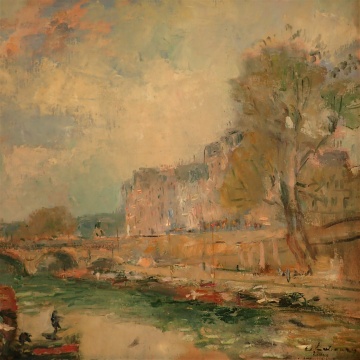 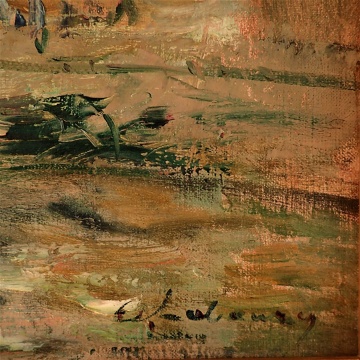 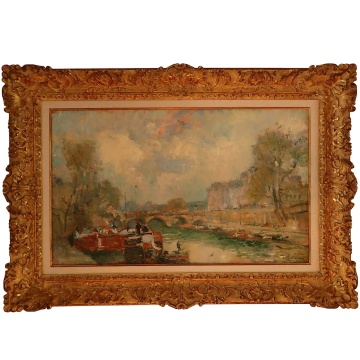 Barges In Front Of The Pont Neuf By Albert Lebourg

A gorgeous Oil on Canvas Painting of Barges in Front of the Pont Neuf in Paris, by Albert Lebourg.

Albert Marie Lebourg was born in Monfort-sur-Risle, a small village in Normandy on February 1st, 1849.
At a very young age, he travelled through the countryside of the region, accompanying his father, a clerk of the court and surveyor, on his work trips.
From that time, Albert Lebourg continued to be amazed by the quietness and the beauty of the surrounding landscapes. He defined himself as “a lover of nature”.
After communal school, his schooling continued at the high school of Evreux, but proving to be a poor student, he stopped going to school after four years.
The choice of a profession became obvious, and it was with an architect and drawing teacher in Rouen that the young Lebourg began a new career as a draftsman.
Lebourg took classes with G. Morin at the municipal drawing school and decided to pursue an artistic career.

In 1872, he exhibited three of his paintings at the 23rd Salon de Rouen and was praised for his work. This exhibition also included works by Corot, Monet, Pissarro, Sisley and Ziem.
A few months later, Lebourg exhibited some studies in the window of the Legrip Gallery in Rouen.
A collector, Laurent Laperlier, bought one and asked to meet the artist.
During this meeting Laperlier, the president of the society of Fine Arts of Algiers, offered Lebourg a Professor of Drawing position, which he accepted.
Albert Lebourg arrived a few months later to take his position, in Algiers, where he would remain until 1877.

In 1879, Lebourg exhibited with Caillebotte, Mary Cassat, Degas, Forain, Monet Pissarro, at the 4th Salon des Indépendants located at 28 Avenue de l’Opéra in Paris.
In 1880, he exhibited for the last time at the 5th Salon des Indépendants, in the company of Caillebotte, Guillaumin, Berthe Morisot, Degas, Mary Cassat, Forain, Raffaeli, Pissaro, Gauguin, at 10 rue des Pyramides.
His talent began to be recognized and buyers became more numerous.
Albert Lebourg was accepted for the first time at the Salon des artistes Français de Paris in 1883.
He exhibited there again in 1886, 1896 and 1899.
He was also one of the most frequent exhibitors at the “Salon de la Nationale des Beaux-Arts” from 1891 to 1914.
The State bought his paintings, which are now shown in the Musée du Luxembourg, the Petit Palais, and the Musée Carnavalet. Great collectors such as Depeaux included him in their collections.

In 1896 his first private exhibition was held at the Galerie Mancini, Paris.
He was honored the following year in the galleries, among them the Bernheim Gallery in Paris.
During the Universal Exhibition of 1900, he exhibited several paintings and was awarded a silver medal.
In 1903, he participated in the exhibition of French culture in Hanoi and received the medal of the Legion of Honor.
In 1904, he moved to La Bouille, a small village on the banks of a wide meander of the Seine southwest of Rouen.
In 1918, his most important personal exhibition took place with more than 260 works presented at the Galerie Georges Petit in Paris.
It was under the aegis of this same gallery that a catalog raisonné, written by Léonce Bénédite, of the first part of the artist’s work was published in 1923.
In 1920 the artist suffered a stroke and became hemiplegic.
In 1925 a solo exhibition was organized in Hamburg by the Galerie Commeter.
In 1926 he was included in the Pittsburg exhibition at the Carnegie Institute during the 25th International Painting Exhibition.
He passed away at his home in Rouen on January 7, 1928.

The Seine, represented in different moods, at different times of the day and in different places, remains one of Lebourg’s favorite subjects.
This river which crosses Paris and Rouen before flowing into the English Channel is above all an incredible commercial link where countless barges sail permanently.

This view transports us, on the docks of the Seine standing by the arcades of the Pont St Michel, looking towards the smaller leg of the Pont Neuf and giving a glimpse of the Louvre’s roofs.
In his framing Lebourg positioned the Seine in the lower right foreground, letting our gaze follow its course towards the Pont Neuf, in the center of the canvas.
On the right side of the work, the buildings and the quays form a chevron that also brings us back to the center and the Pont Neuf.
The left side leaves room for human activity with the boatmen busy on their moored barges.
The upper part representing the sky, is also part of a chevron whose point is directed to the center of the canvas, always towards the bridge.

The sky is perhaps what characterizes Albert Lebourg’s work the most.
With him, the sky is always in motion, the clouds form and unform, melt and fragment.
The atmosphere is penetrating, attractive, palpable…
Always very attentive to the play of light, Lebourg knows how to translate this ephemeral fairy tale of the moment giving his work this attractive and penetrating charm, this invincible attraction.
Translating into canvas the moments that seem elusive and that we often would like to retain, Lebourg manages to seize them and transmit them to us.

In a typically impressionist technique, the brushstrokes are fast, short and close, sometimes crossed.
To increase the effect of relief, he plays on the thickness of the material placed on the canvas, even going so far as to let the canvas show through under a thin layer of color.
The colors are soft and pearly, except for a few touches of bright colors; the atmosphere is muted and relaxing.
Made at the end of the 19th century, this magnificent work is in perfect condition, signed in the lower right corner, on its original canvas in a gilded wooden frame of the period.

The authenticity of the work has been confirmed by the Fondation Wildenstein Paris, on January 22nd 1988.
This certificate will be given to the buyer.

Provenance:
– Galerie Odermatt Paris
– Swiss private collection, acquired from the above gallery on 1987 remained in the family by descent
– Acquired by Antique French Fine Arts in 2022.