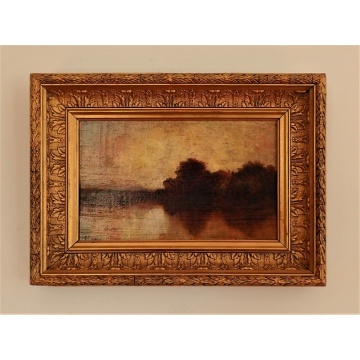 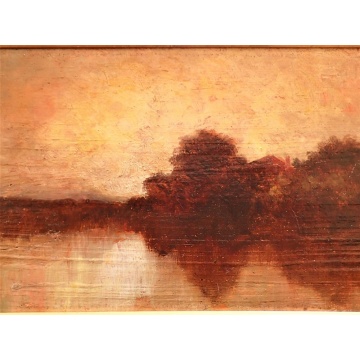 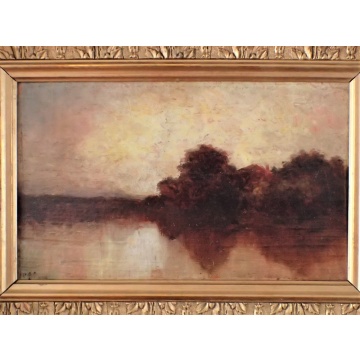 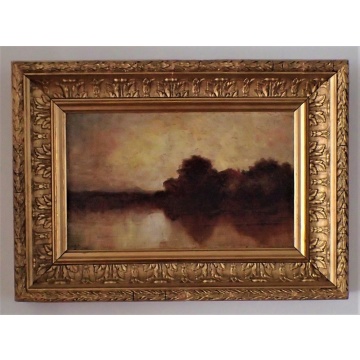 Charming Barbizon School Oil On Panel Of A Sunset.

Charming Barbizon School Oil on Panel of A Sunset on a River.

Depicting the sun setting across a river, this small oil painting favors jewels tones of orange and yellow highlight by darker shades of deep red and black.
One can just make out in the middle of the trees the roof of a house or farm.

Typical of what would be called the Barbizon School we are not here dealing with an idealized scenery, but just the rendition of a sunset in a real setting.
Knowing this area of France, you can nearly feel the shimmering of the light and the quiet associated with this hour of the day, when all becomes subdued and the holds its breath.

The Barbizon School informally refers both to the geographical and spiritual center of a succession of landscape painters established around Barbizon, and to their desire to work “in the open air and from nature” in the forest of Fontainebleau.
In the same spirit, another territory, the Valley of the Painters between Berry and Limousin would be home to the Crozant school.
The first to go to the side of the forest of Fontainebleau was undoubtedly Camille Corot who explored this place as early as 1822. Unlike the painters who came there to practice representing trees, he was in search of the truest landscape that he wanted to represent without frills or mannerism: a few kilometres from Paris, this forest offered the painter a kind of wilderness in reduction, far from the suffocating urbanism of the capital.
The Paris Salon of 1824 marked a turning point because English landscape masters such as John Constable were exhibited there. Later, the invention of the gouache tube in 1841, the opening of a railway line in 1849, were all factors that accelerated the process.
More and more painters went to Barbizon, Chailly-en-Bière, Bourron-Marlotte, to the point that the fashion was launched, and that they were called “plein-airistes”.
The press amused themselves with caricatures, showing dozens of painters massed in front of their easels, each one under an umbrella!
This influx and the arrival of the train naturally led to the opening of many infrastructures: restaurants, hotels, grocery stores, allowing painters to stay longer.
At the beginning of the 19th century, the artistic criteria were set around the neo-classical tradition, in the suite of the painter Jacques-Louis David. On the fringes of this academicism, the romanticism formalized by Géricault, Bonington and Delacroix was gaining ground.
In the academic tradition, sensitive observation of nature was considered inferior to intellectual experience, and landscape remained a minor genre. Artists such as Rousseau and Daubigny responded to emerging industrialization and urban pollution.
Facilitated by the industrial production of paints, favoring greater mobility, the return to nature appears obvious, the tranquility of contemplation taking over the hullabaloo of the city.
In 1824, the Paris Salon exhibited some of John Constable’s works. His rural scenes had a decisive influence on younger artists, leading them to abandon the formalism of the time and draw their own inspiration from nature: they produced canvases that were often rural, moving away from a return to mythological dramas, and were inspired by 17th-century Dutch landscape painting and contemporary English landscape painting.
During the revolution of 1848, the painters who were already gathered under the name of the “Crozant school” met and deliberately chose to follow the precepts of John Constable, in order to make nature itself the subject of their paintings. Among them, Millet extended his vision of landscapes to the characters, painting peasantry and field work. Des glaneuses (1857) is a perfect example of this, showing three peasant women busy gleaning after the harvest, without dramatic staging or demonstration, but simply an evocation of simple life, for example Albert Charpin (1842 Grasse – 1924 Asnières) who painted many landscapes, sheep and cattle herds.

In 1849, the development of transport, with the construction of the railway line linking Paris to Melun, favored the arrival of artists and tourists.
Barbizon’s painting was one of the sources of inspiration for many painters such as Hippolyte Camille Delpy, and particularly the Impressionist painters.
The emergence of the Impressionist movement in the second half of the 19th century was partly due to the influence of the painters of the Barbizon school.

Our charming Panel bears a signature on the right hand side, but it has been partly erased hence we have not been able to identify it!
The Panel measures 5.51 inches high x 9.25 inches wide.
The Gilt wood frame measures 9.44 inches high x 13.18 inches wide.