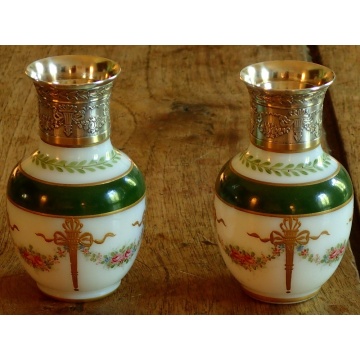 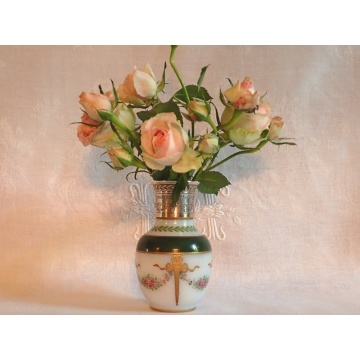 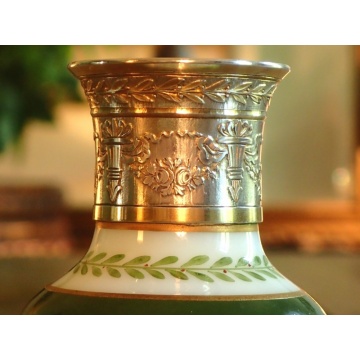 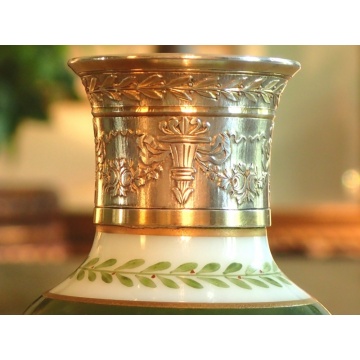 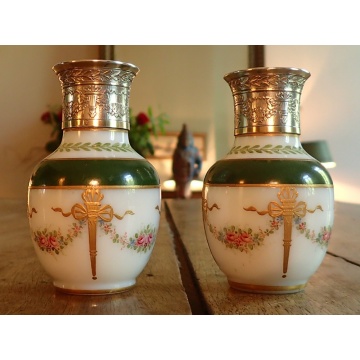 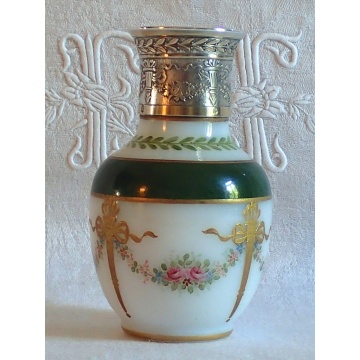 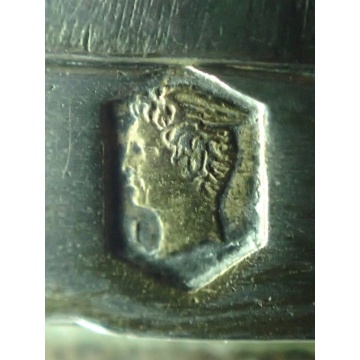 Charming Pair of Silver and Opaline Glass Vases By Lapeyre~Sold~

Since, apart from the charming Silver border, these vases are delicately created out of Opaline Glass –allow us to offer some background on the material.
Opaline Glass first appeared in France during the Empire period when the Baccarat workshops managed to revive the techniques used by the Venetian Artists during the 16th Century.
Baccarat, St Louis and the Creusot were the main production centres in France soon rivalling the Venetian, Bohemian and English makers.
In France the correct appellation was then ‘Cristal D’Opale’.
The technique, which soon begun to rival that of Porcelain, was achieved by dissolving metallic oxides in molten glass. Until the 1820s ‘Cristal D’Opale’ tended to be opalescent and translucent, evolving later on into more opaque results due to different experiment including that of adding to the mixture arsenic acid!
Re heating and re cooling also worked on darkening or lightening the effect.
Under the Restoration period it became all the rage and was again revived during the later part of the 19th century.

Our lovely pair of vases shows a beautiful décor of hand painted sprays of roses, torches and flowing ribbons, as well as a laurel wreath accented by a gilt rim and dark green banding.

The top part of the vases is done in Silver and Vermeil (18 carat gold covered silver) using again the same motif as the painting for its décor.
The effect is absolutely charming!
Their small sizes are perfect for a spray of mini roses on a dinner table!
There is a very tiny discoloration in the green banding iin one spot.

The Makers Mark is for Henri LAPEYRE who registered his mark on November 19th 1895.
It shows an H and an L, separated by a spoon between two crescents.
His workshop was located 49 Rue Meslay in Paris.