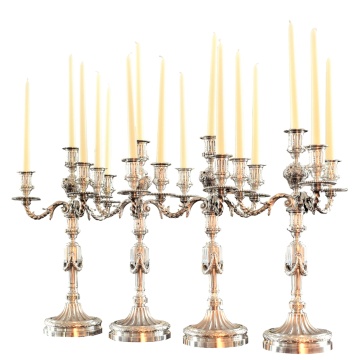 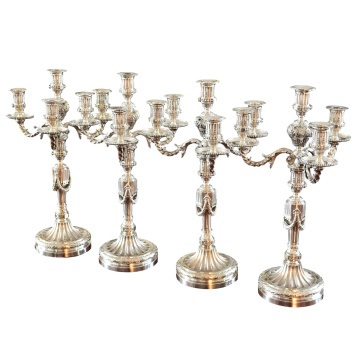 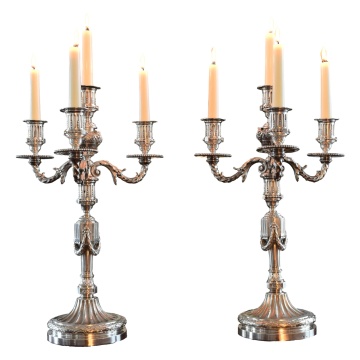 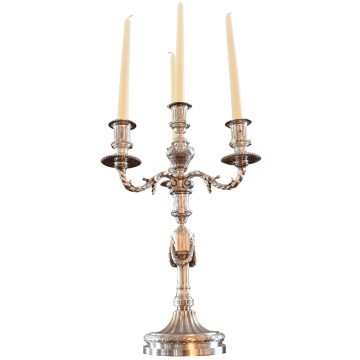 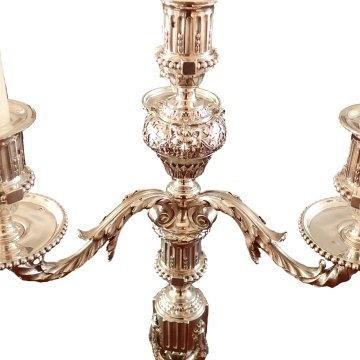 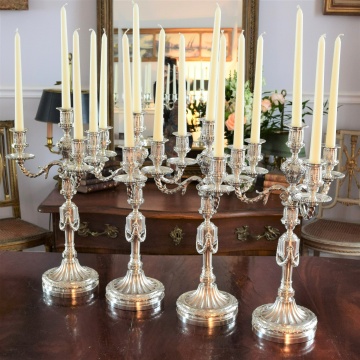 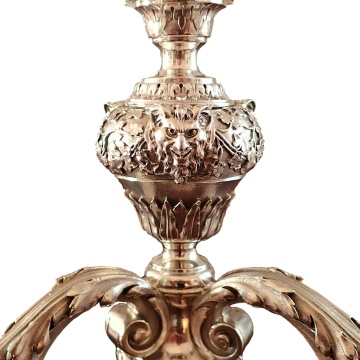 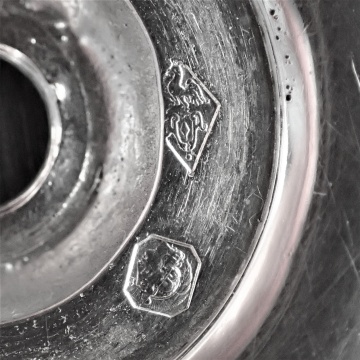 These amazing Candelabras Show a shaft with triglyphs and suspended laurel garlands, the base with fluted doucine surrounded by a torus of laurel leaves, the bouquet with four removable lights.
The work is absolutely astounding!
The Center part of the candelabras features 3 wonderfully carved heads of Pan, standing out amidst grape leaves etched into the solid silver knob.
The quality of the etching and the ‘guillochage’ is incredible.
The carving of the Laurel taurus is also incredible in its work and heftiness.
The guilloche work on the pedestal’s grooves is another marvel, creating a diamond shine and glitter when the candles are lit.
The Candelabras are solid silver and incredibly heavy at over 10.73 kilograms or 23.65 pounds.

This extraordinary set could only have been requested by one of France’s most incredible Families, whose lineage goes back to the 10th century.
The said Family is one of the most famous families of the French nobility, whose origins go back to Augoumois in the Charente area in the 10th and 11th centuries (with official evidence of nobility in 1019). As a matter of fact, only four other families in France, including that of the Capetians, can claim a similar seniority of nobility.
The Family counted a Godfather to King Francois 1er, Barons and Duke and was one of the only ones allowed Residence in Versailles.
It also included a famous Author and Moralist, creator of the famous Maximes in 1665.
The Full history of the Provenance will be given to the buyer.
The Family was forced to let go of its main castle in 2020 after struggling for decades to pay for the upkeep of their different properties and the inheritance taxes.
Subsequently in 2021 a large portion of their Art and Antiques belongings were dispersed.

The Makers Mark is for André AUCOC. It shows two A’s topped by a Rooster.
His first Mark was registered 1887 and cancelled in 1911.
The mark deserves a little more explanation’s as it was one of the most outstanding amongst the French Master Silversmiths.
Casimir AUCOC first registered his mark in 1821, and founded the company at 154 rue Saint Honoré. The company then moved in 1835 to 6 rue de la Paix, where it stayed until 1936.
From 1836 to 1856 it was managed by Jean Baptiste AUCOC who had taken over from his father.
He was later followed by Louis AUCOC who took over starting 1856, before handing the management of the company to André AUCOC in 1887.
The company was famous for its outstanding larger pieces which beautifully and expertly reproduced the styles of the past centuries.
In 1839 it obtained its first silver medal in one of the first versions of the Universal Exposition to be held in Paris.
It continued collecting medals in 1844, then 1855 and 1867 at the Paris Universal Exposition.
Under André AUCOC the company took home the Gold medal in 1889 and 1900 and was one of the laureate at the Louisiana Purchase Exposition (more commonly known as the St Louis World Fair) in 1904 in Missouri!