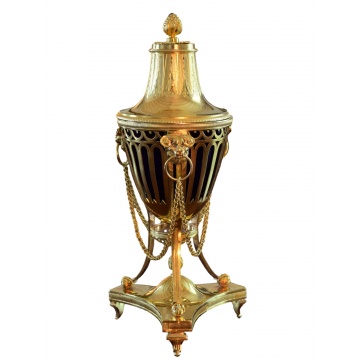 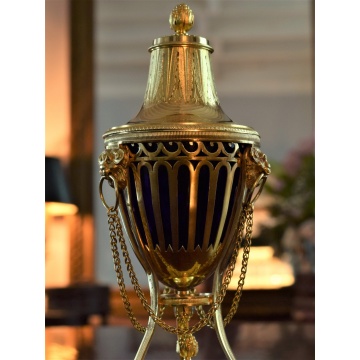 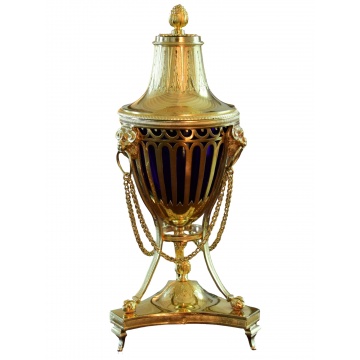 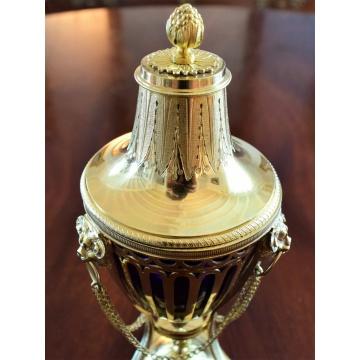 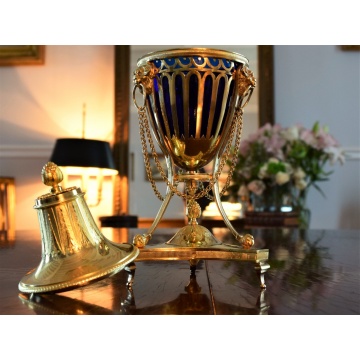 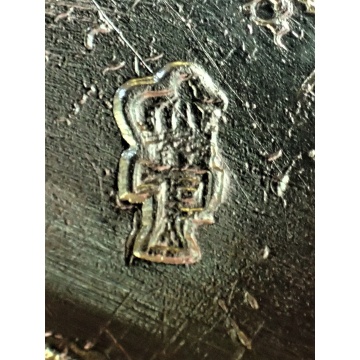 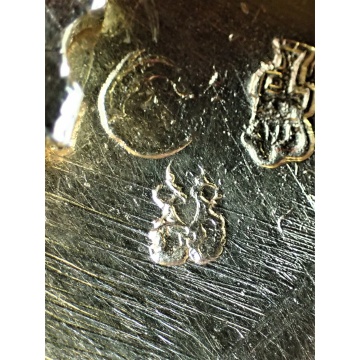 This beautiful Vermeil (24 carat gilded silver) Drageoir is by ‘Maître Orfèvre’ Francois Joubert who worked out of Paris.
The body is Baluster shaped with geometric designs decorating its body.
The Drageoir is held up by tripod shaped pillars ending on one in Lion’s paws over a ball of silver and on the other by Lion’s Muzzle delicately carved.
But when one looks closely at the muzzles you will notice that the ears are not those of a lions but of buffalos…Hence we have here a Chimera representation… an imaginary animal…
The domed lid is delicately etched with laurel leaves and toped by a raspberry finial resting on a wreath of laurel leaves.
The Chimeras each hold a ring of vermeil with chains linking each figure. It is extremely rare to find the chains still intact!

Because of its small size this item would either have been part of an Egoiste Set (Selfish Set) or a Traveling one…
It is incredibly rare to come upon a Drageoir dating to before the French Revolution. In the case of this little marvel, we are right at very end of the Pre-Revolution era: 1789…
That year the French Revolution started and the Silver Makers would see their trade completely stopped until the end of the what would be known as the Terror in 1794.
The French Revolution itself ends officially with the creation of the Directory in 1795.
So a very very rare piece….
The bowl insert is cobalt crystal, it is original and intact.

The Hallmark is Poinçon Aux Fermiers Généraux :
Photo # 7 we have the Crowned P for Paris – September 1789, under Fermier Général (Tax collector if you will..) Jean François Kalandrin.
Which would be the last one before the Revolution ended the Silver Trade and Registration for a few years.
To give a little background the French Revolution officially starts on May 5th 1789, but does not bring down the Trades and their Laws before the end of 1789.
We also have the Charge mark of of an Oak (not pictured) which puts the start of the work at the end of February 1789.So the piece was created between February 1789 and December of the same year.

Photo # 8:
The Makers Mark is that of François JOUBERT.
It shows his initials surrounding a Heart and a Crowned Fleur de Lys.
Joubert registered his mark on September 6th 1749 and worked until the Terror seems to have caught up to him.
He is no longer heard off after 1792.