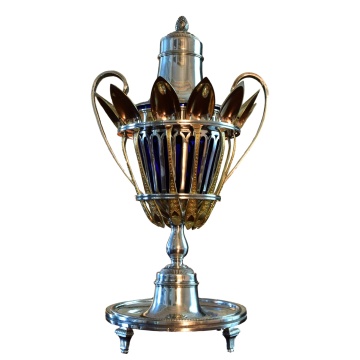 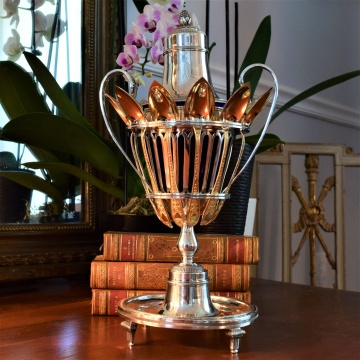 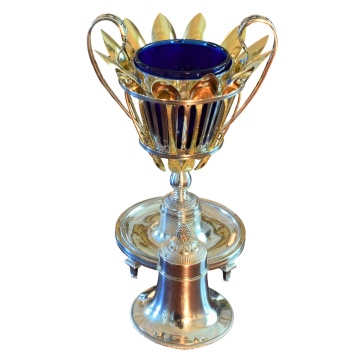 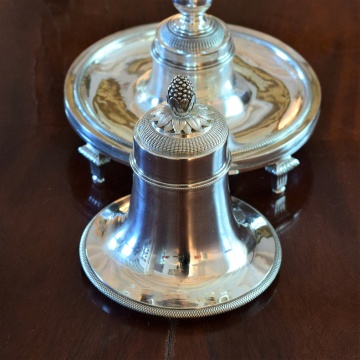 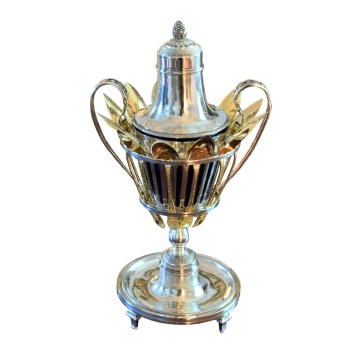 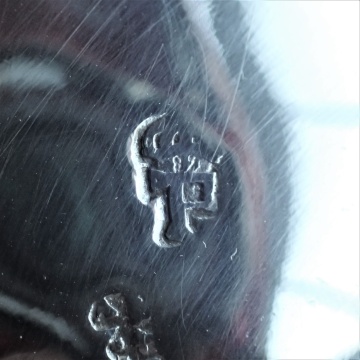 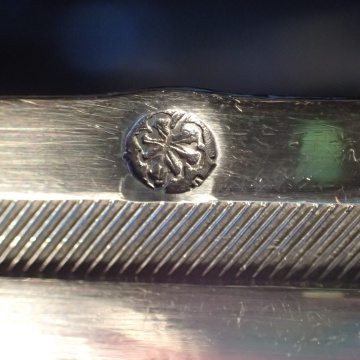 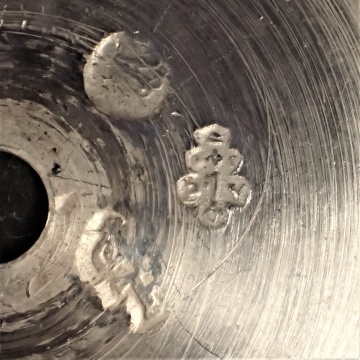 Though the name indicates a connotation of Jam, it is but a magnificent Sugar bowl with its individual spoons around it.
As usual with Pre-Revolutionary French Silver The Marks are what is truly special and a lesson in history.
The fact that this charming piece is also intact, is incredible!
In this lovely piece the baluster-shaped body from the Louis XVI period and its silver spoons, stand on a wide base bordered with a silver cordeliere.
The body house the cobalt blue blown glass interior while the upper and lower part have a silver border cut out to receive the spoons.
The décor on the body is simply geometric and lovely.
The Lid is beautiful, cone shaped and topped by finely chiseled berry resting on the a crown of leaves.
The handle are decorated with acanthus leaves in a cut out motif are rounded and raised above the body of the Confiturier giving it a lighter feel.

The Particularity of these pieces, is that the Maître Orfèvre who did the main object, did not create the spoons…The spoons were always ordered from a ‘Cuilleriste’ (Or Spoon Maker) who specialized in them.
The Makers Mark for the Spoons is that of ‘Maitre Orfèvre Cuillériste’ Clément Guillaume.

The Hallmark is Poinçon Aux Fermiers Généraux :
Photo # 6 we have the Crowned P for Paris – September 11th 1789 under Fermier Général (Tax collector if you will..) Jean François Kalendrin.
Hence 2 years and two months before the French Revolution ended the Silver Trade and Registration for a few years.

Photo # 7:
We also have the Discharge mark of an Oak leaf which puts the end of the work before February 22nd, 1789.

Photo # 8:
The Makers Mark is that of Pierre VALLIERE
It shows his initials surrounding a Key and a Crowned Fleur de Lys.
Vallière registered his mark on December 18th 1776 and worked until the start of the Revolution with the same mark. He registered a slightly different Mark after the end of the Terror period.
We also see the A in a circle used as a Charge Mark under Jean François Kalendrin starting February 23rd 1789.