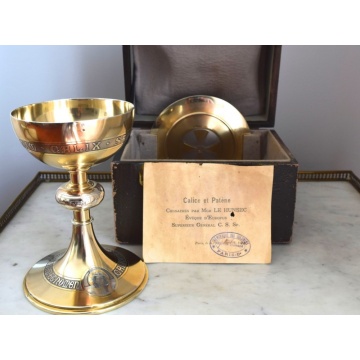 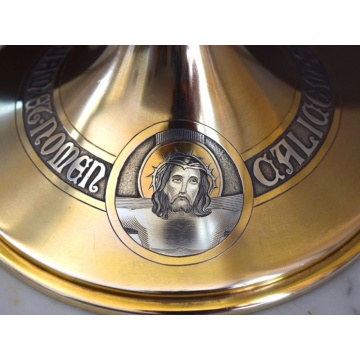 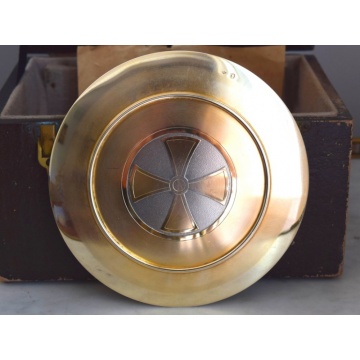 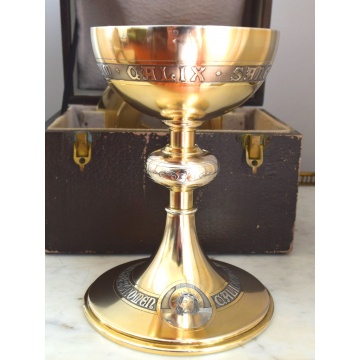 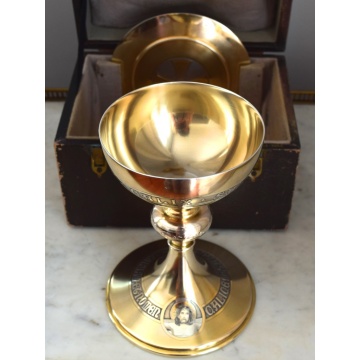 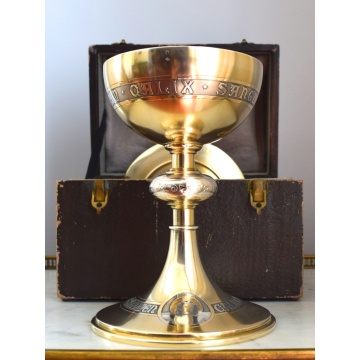 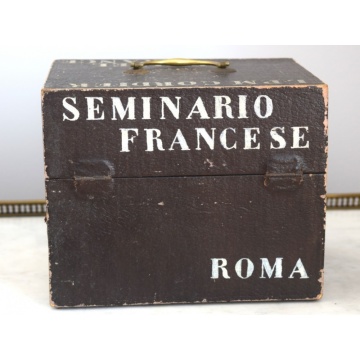 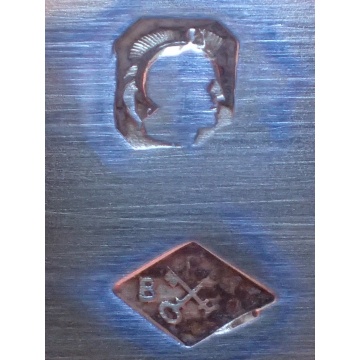 This beautiful piece, with its simple yet beautiful decor,is typical of the early part of the 20th Century

When you describe a chalice, you usually start at the bottom and work your way to the top. The foot of the vessel tells us a great deal about the chalice and its history.
The foot is commonly inscribed with the maker’s information and the year hallmark as well. In our Chalice’s case the Makers Mark is also present on the Body and on the Cup of the Chalice.

The base is almost always oversized compared to the bowl, as Catholic doctrine notes the sacredness of the wine and emphasizes the importance of keeping the wine from being spilled.
The foot of our Chalice holds a beautiful etched depiction of the Christ on the holy Cross.
It also hold the following Inscription in latin:
‘Calicem Salutaris Accipiam Et Nomen’
‘I will hold up The Chalice of Salvation and will Invoke Your Name’

Above the base is the stem. Almost all chalices have a raised knob, on the stem. This practice also arose out of Catholic doctrine about the importance of not spilling the sacred wine. The knob is another area of the chalice that is typically ornamented.
In this case it is decorated with a latin inscription : ‘Domini Invocabo’
‘I will Call on The Name Of The Lord’

Above the stem, is the bowl. The bowl is divided into two parts.The upper part of the bowl, or the rim, is required to be unadorned.
On our chalice the bowl shaped Cup holds the inscription:
‘Hic Est Calix Sangunis Mei’
‘For This Is My Blood’

While often, only the part that touches the sacrament is made from precious metals, in the case of our chalice, the whole piece is entirely made of solid silver and completely gold washed.
The only piece that is not in silver is the Foot protection located underneath the chalice.

This beautiful piece comes in its original box and has as well its original Paten in Gilded Silver.
The Paten is adorned with a Holy Cross.

It comes with its Dedication slip done on September 28th 1930 in Paris at the Seminary of the Colonies by Monseigneur LE HUNSEC, Bishop of Europus (named as such in 1920).
He was born in 1878 in Pleumeur in Bretagne and later dedicated his life to The Christian colonies.
He was particularly known for his work in Senegal where he was sent starting 1906 and was one of the first to advance the idea of freedom for the country from the French rule. Should you wish more information on him we will be able to provide you with his story.

The piece is in excellent condition, and has been created by one of the greatest Dinasty of Master Silversmiths in France who specialized in Religious Art.

The Makers Mark is that of BIAIS Freres & Fils
His mark shows an B F F surrounding two crossed keys
His mark was registered on July 10th 1890 and Cancelled on December 16th 1927.