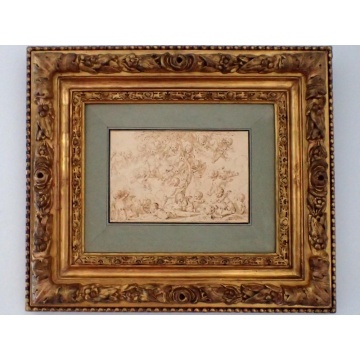 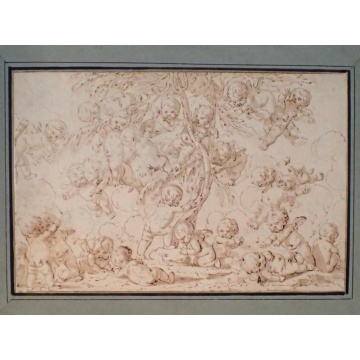 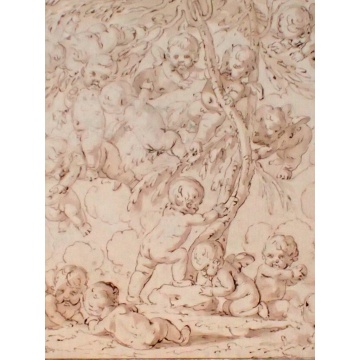 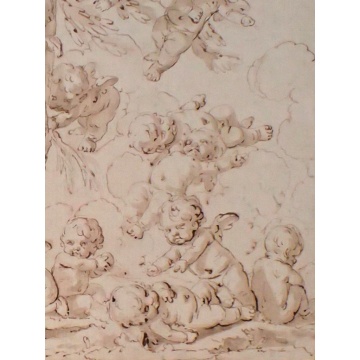 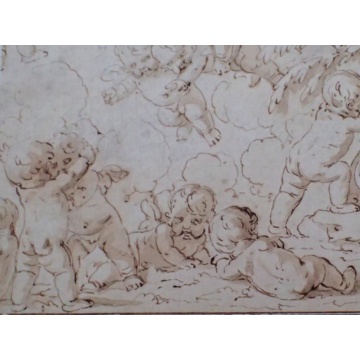 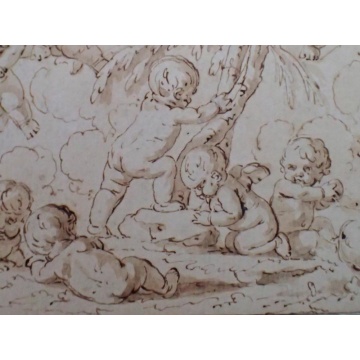 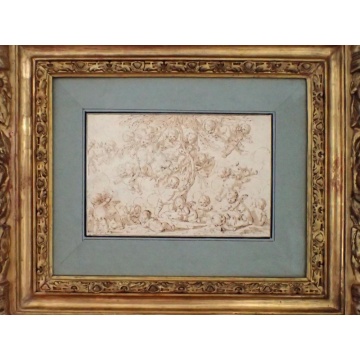 Gorgeous 18th Century French Ink Drawing Of the Putti By the Tree Of Life By Louis Felix DELARUE.

The charming drawing is executed in ink and brown wash in masterful strokes which bring to life the scene depicted.

The Cherubs or Putti can be seen dancing around the Tree of life!
Far from playing a game, Genesis teaches us that the Cherubs are the keepers of the Tree of life.
In thus they keep the humans from reaching the tree and reaching Immortality, but it should not be considered as a curse, as reaching Immortality without being in a state of perfection would mean perpetual damnation…
The Cherubs are also the bearer of God’s voice and the keepers of his message.
It is somewhat funny to see that the Cherubs are originally the same mystical beings called Cherubim’s known during Antiquity and more particularly to the Assyrians as the Fearful Winged Bulls defending their city gates….
With the Renaissance came the transformation from the more fearsome Angels into the Young and Cheeky Cherubs, full of mirth and sweetness!

Louis Felix DELARUE was born in Paris on October 10th 1730, and passed away in this same city on June 24th 1777.
A wonderful draughtsman and sculptor he studied under Lambert Sigisbert Adam and obtained in 1750 the Prix de Rome. He went on to Study at the Academia in Rome and returned only later to the Academie de Saint Luc.
He was a particularly talented artist and was often mistaken for his brother Philibert Benoit De La Rue, though his oldest sibling wrote his last name differently (in three words instead of only 1) and had a completely different style of drawing, specializing mostly in battle scenes.

Louis Felix DELARUE’s drawing of the Putti is a masterpiece of delicate strokes and wonderful life!

The Gilt wood frame is another wonderful feature of this piece…in very good condition, it is a Louis XIII frame (Hence 17th century), just absolutely beautiful….

The drawing was appraised by the Cabinet de Bayser.
It was purchased in Vernon in 2018..