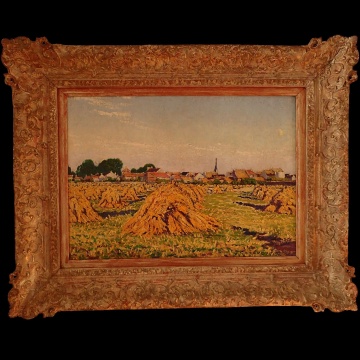 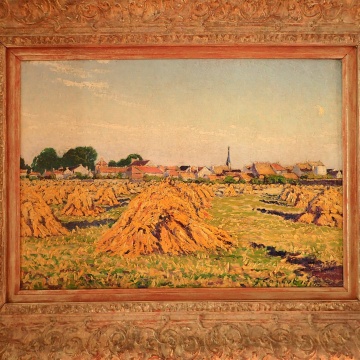 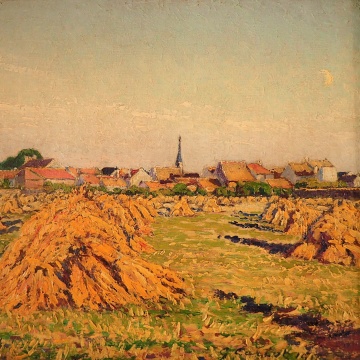 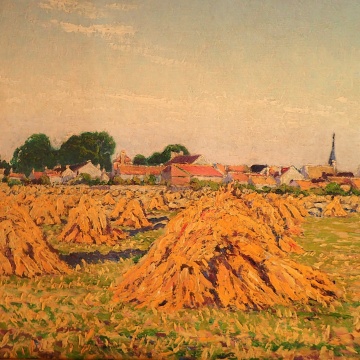 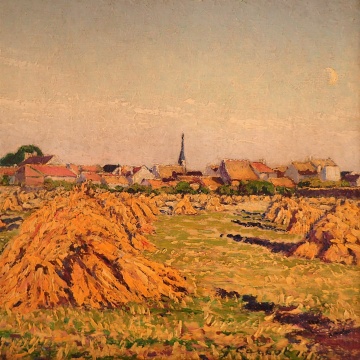 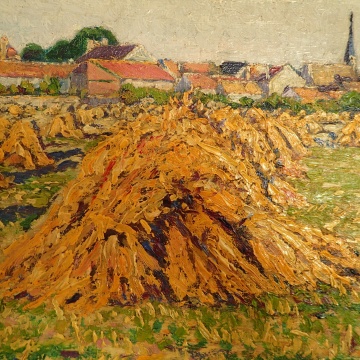 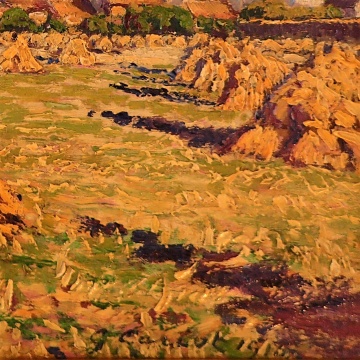 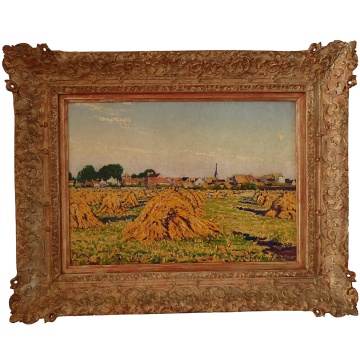 Haystacks In Front Of Périgny sur Yerres By Gustave Cariot

A Lovely Oil on Canvas of Haystacks in Front Of Périgny sur Yerres, by Gustave Cariot.

Gustave Camille Gaston CARIOT (1872 – 1950), was born in Périgny sur Yerres, about thirty kilometers south of Paris.
His father, a trunk-maker, made his son his apprentice, but from an early age Gustave Cariot showed a natural artistic talent and spent his free time drawing and painting.

He was a member of the ‘Société des Artistes Indépendants’ and exhibited from 1909 at the Salon de la Société Nationale des Beaux Arts, the Salon d’Automne, and the Salon d’Hiver, and in the main salons of the capital until his death. It was the illustrious art dealer Paul Durand Ruel who promoted his work to collectors.
Gustave Cariot was a self-taught painter, attracted at first by Impressionism and the constant search for the transubstantiation of the effects of changing lights and atmospheres.

Although he never wanted to accept the label of Neo-Impressionist, he is known for his Pointillist and Divisionist works.
Constantly searching for effects to capture light and depth in his paintings, Cariot developed a very personal technique of complementary theory and Divisionism.

Using a palette of very vivid colors which he applied pure, side by side in a thick Impasto, to create greater effects of relief and depth, he succeeded in achieving an exceptional power of light.

Gustave Cariot was particularly marked and influenced by Claude Monet’s series “Les meules”, “La cathédrale de Rouen” and “Les nymphéas”, all intended to capture and transubstantiate the different effects of light and atmosphere at different times of the day or different weather conditions.
Our painting is the concrete result of this incessant research.

In this work, representing haystacks (his favorite subject) in front of his native village of Périgny sur Yerre, the artist displays all his technical mastery of Divisionism.
Using his palette of vivid tones, he combines complementary colors to better transcribe the effects of studied relief and capture the multiple effects of light.
It is important to note, under a thick impasto, meticulously applied, the use of pure purple to represent the shadows in contrast with the yellow of the straw and the intense green of the grass.

The painting is constructed to accentuate the effect of depth. By placing the haystacks in the foreground, the viewer is captivated by this motif. Then, following the line formed by the central row with the eyes, his gaze naturally turns to the right to reach the horizon line formed by the village, and finally the sky, which represents almost half of the canvas, enabling the eyes’ escape to infinity.

Signed G Cariot, and dated 1910 in the lower right hand side, this painting is an extraordinary representation of Gustave Cariot’s talent where all his technicality and mastery are united to transmit a testimony of his unique style.