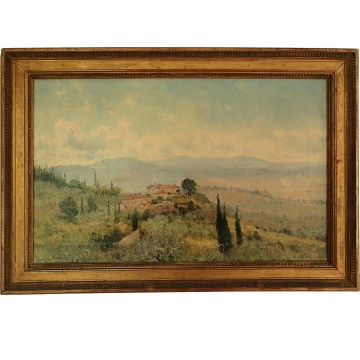 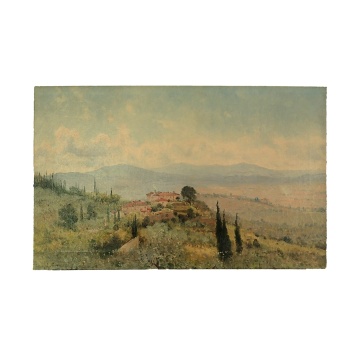 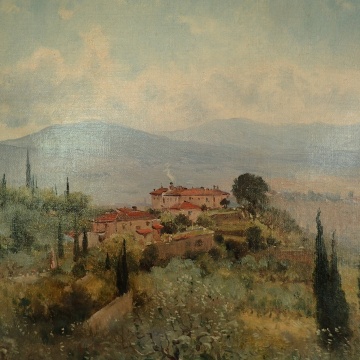 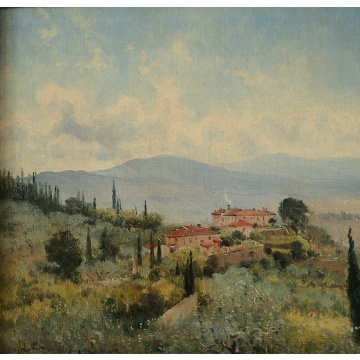 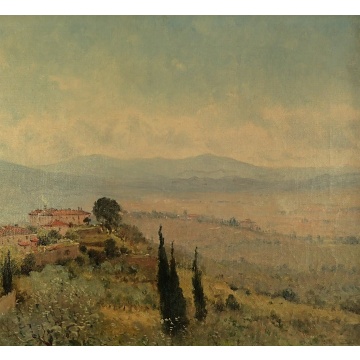 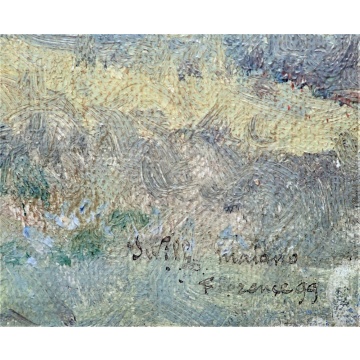 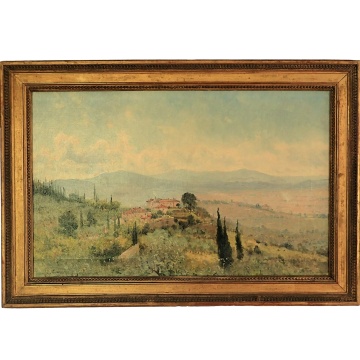 The Maiano Villa Overlooking the Tuscany Valley by IWill

The Maiano Villa In Florence, overlooking the Tuscany Valley, by Marie-Joseph Léon CLAVEL or IWILL.

Iwill offers us a masterful representation of his talent through this sumptuous view of the Tuscan countryside.
Overlooking the city of Florence, the Villa Maiano is one of the gorgeous Florentine style palaces surrounding the city in the countryside.
Built in the 15th century, it was originally destroyed in 1467 by a hurricane. Its owner, ruined by this disaster, had to sell the remaining walls with the huge estate that surrounded it.
Several noble families have successively owned this house where, in 1566, Santa Maria Maddalena di Pazzi would be born.

The artist has positioned the Villa Maiano in the center of the composition, to give it even more presence, adorned with pink ochre, it appears as if suspended above the void, overlooking the Florentine valley with all its majesty.

IWill structured his painting in two horizontal rectangles, one intended to treat the sky and the second the earthly elements.
In a diagonal from the middle left of the painting to the right corner, the artist used this lower third to compose his foreground, where the silvery green foliage of the olive trees contrasts with the deep green of the cypress trees rising towards the Azur sky. This is followed by a symphony of greens to render the vibrant effects of this magnificent Mediterranean vegetation, treated with delicacy and great details.

Beyond that, the colors become more nuanced in shades of pink and mauve, rendering with great accuracy the misty atmosphere of the plain and the surrounding peaks.
The sky, which occupies the upper half of the canvas, is masterfully interpreted, giving an additional effect of depth to the composition.

Marie-Joseph Léon CLAVEL, nicknamed IWILL was born in Paris in 1850 and died in the same city in 1953.
The son of an economist, he spent part of his childhood in Nancy, then finished his studies in Paris.
Though attracted from a young age to Art and painting, he began his active life as an economist, to satisfy his father’s expectations.
At the beginning of the 1870 conflict, he joined the Imperial Army. Taken prisoner, he was detained in Switzerland, where the splendor of the landscapes convinced him to become a painter.
After his release, he returned to Paris and became a stenographer at the National Assembly, but dreamed only of being able to live from his Art.
It was during this period that he kept repeating “I will” which became his nickname.

He exhibited for the first time in 1875 at the Salon des Artistes Français under the pseudonym IWill.
He participated in numerous exhibitions in France and abroad and received several awards, including a silver medal at the Universal Exhibition of 1889 and a bronze medal at the 1900 exhibition.
He was named Chevalier de la Légion d’Honneur in 1894.

Iwill traveled extensively during his career and moved his easel throughout France and Europe, particularly in Holland and Italy.
The painter exhibited several times in the United States and, in 1910, the Detroit Museum of Art held an exhibition dedicated to his paintings.

Our Painting is signed, situated, and dated 1899 (99) in the lower right corner as shown on the 7th photo.
It is also situated on the reverse on the Frame or Chassis.